Scandinavian Enviro Systems’ recovered Carbon Black, EnviroCB 550, is a new semi-reinforcing carbon black product for polymer production. Its performance in compounds is similar to N550 for which it can be used as a 100% replacement as illustrated in the Volvo Cars’ chassis grommets.  Furthermore, as a result of both rigorous feedstock control and the advanced Enviro process, its quality and performance rivals virgin Carbon Black whilst costing 10% – 20% less. 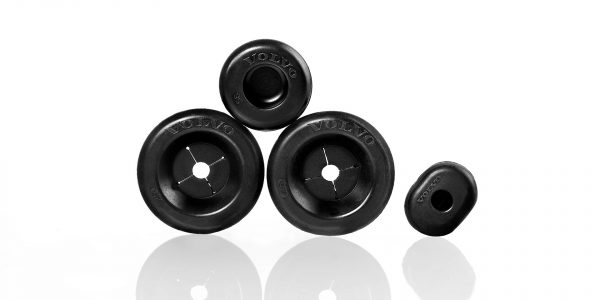 The recovery of Carbon Black from used vehicle tyres has been explored for many years with mixed results. Working closely with rubber manufacturers, Scandinavian Enviro Systems has refined its process to produce a consistent, high quality recovered Carbon Black (rCB) which meets Volvo Cars’ technical and performance requirements.

2G BioPOWER is able to supply EnviroCB 550 for both testing and production applications.

EnviroCB 550 has also been found to meet performance and manufacturing requirements in the following applications by a number of companies, including Trelleborg and AnVa Polytech.

It can also be used as a substitute for N660 in many applications.

Applications may employ EnviroCB 550 as a 100% substitute, but others may require slight changes of the compound recipe – as in the Calendering example above where a partial replacement worked well.

EnviroCB 550 has the following credentials:

EnviroCB 550 is covered by REACH and qualifies as a product within the EU.

A technical datasheet is are available here.

EnviroCB 550 is competitively priced, even when a low cost in oil drives the price of virgin CB down. When oil prices are high, EnviroCB 550 will be extremely competitive as production costs are not directly linked to oil.

How is it Produced?

Enviro’s process is called Carbonization by Forced Convection, and pyrolyses shredded car tyres using a hot gas. This ensures a consistent fine carbon with very low volatile content. The carbon is separated from the metal, milled and beaded using conventional processes. The resulting product comprises the original carbon in the tyres, plus inert additives and fillers. The additives include silica, zinc and sulphur. It has been found that less zinc is required in compound formulation, whereas the sulphur is inert. In principle the silica could be re-activated.

The tyres used in the production of EnviroCB 550 would typically be burned in cement kilns and power stations. However these applications place as much importance on the disposal of tyres for a fee (so called gate fee) as they do on the energy content, and the latter may not always be utilised. Cement kilns also value tyres for their steel content.

Virgin Carbon Black requires considerable energy to manufacture. A typical plant uses 500 kWh/t carbon black. Moreover, 33 GJ feed stock and about 30 GJ process energy are needed (Leendertse and Veen, 2002). If burned, the total GHG emissions amount to over 5 tonnes of CO2 per tonne of carbon black.
Pyrolysis of tyres leads to full use of the energy content of tyres and re-use of the resultant recovered Carbon Black avoids the GHG emissions that would result from tyre incineration.

Enviro is manufacturing commercial quantities of rCB at its current plant in Sweden. Plans are in progress for a for further plants using Enviro’s technology, including the UK, Denmark and the USA.  Michelin and Enviro also plan a joint plant.

Samples are available for laboratory and formulation tests, and larger quantities can be supplied for manufacturing tests.